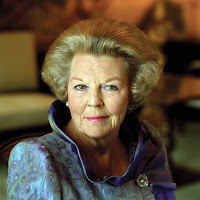 Queen Beatrix succeeded her mother as Queen of the Netherlands in 1980. From that date, Her Majesty formed part of the government. The Queen was married to Prince Claus. They had three sons: Prince Willem-Alexander, Prince Friso and Prince Constantijn. The eldest, Prince Willem-Alexander – the Prince of Orange – will succeed her.
The Netherlands is a constitutional monarchy: the position of the monarch is laid down in the Constitution. The monarch is the Dutch head of state and, together with the ministers, makes up the government. Queen Beatrix has been the head of state of the Kingdom of the Netherlands since 1980.
For more informations go to The Royal Dutch House website.
Posted by Jenny at 10:58:00 AM

thanks to your post. i did not know that the netherlands is a monarchy. wow...very nice!

Jenny
Im a filipina married to a dutch man and a daughter named Nia. I love to write, cook and travel.

View my complete profile
This blog talks about my enjoyment, happiness and obstacles of being a dutch wife and my on going life here in the land of cheese, milk and clogs.
Read and enjoy!


MVV application for a Filipina/Filipino Dutch Wife/Husband. Click these links.

To all who are searching about the Basic Exam in Netherlands, Here are the links you should click.

Visit my other blog

If you have questions, please leave me a message

God bless us! Have a nice day ahead!