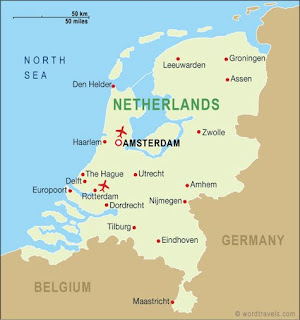 The Kingdom of the Netherlands consists of three parts: the Netherlands in Western Europe and the Netherlands Antilles and Aruba in the Caribbean. The Netherlands proper has a surface area of 41,526 square kilometres. It is flanked to the north and west by the North Sea, to the east by Germany and to the south by Belgium.
The Netherlands is very flat and nearly a quarter of its area is below sea level. This is where the Netherlands gets its name ("nether" which means low), though the name Holland is frequently used. Strictly speaking, this name refers to the two western coastal provinces, North and South Holland, which played an important role in the country`s history.
The country`s location near the sea also influences its climate. The average temperature is 17 degrees Celsius in summer, and two degrees Celsius in the winter. On average, 760mm of rain falls each year, fairly evenly distributed over the seasons.
The soil in the south and east of the country, where the landscape alternates between woodland and health, mainly consists of sand and gravel. The soil in the west and the north mainly consists of clay and peat. The landscape in this region which is criss-crossed by countless rivers and canals, is made up mainly of polders, such as reclaimed land, protected from flooding by dikes.
Posted by Jenny at 10:17:00 AM

Jenny
Im a filipina married to a dutch man and a daughter named Nia. I love to write, cook and travel.

View my complete profile
This blog talks about my enjoyment, happiness and obstacles of being a dutch wife and my on going life here in the land of cheese, milk and clogs.
Read and enjoy!


MVV application for a Filipina/Filipino Dutch Wife/Husband. Click these links.

To all who are searching about the Basic Exam in Netherlands, Here are the links you should click.

Visit my other blog

If you have questions, please leave me a message

God bless us! Have a nice day ahead!